Hard seltzer’s bursting bubble hit Boston Beer (NYSE:SAM) harder than most because it went in on the trend more than anyone.

Even though its Truly brand continues to grow faster than the overall market, taking share from rivals, because growth rates have fallen sharply from the triple-digit expansion previously enjoyed, seltzer sales may soon turn negative.

Although the beverage is not going away, hard seltzer could become just a niche, seasonal drink, a development that jeopardizes the billions of dollars spent by brewers on production capacity. Consumer surveys, however, indicate the beverage could be saved by cannabis.

Data from Veylinx, a consumer insights platform that uses behavioral research to predict purchasing habits, indicates consumers could start drinking more hard seltzer again if it is combined with cannabidiol, or CBD, the non-psychotropic compound found in marijuana.

CBD was the one ingredient that sparked the most interest among consumers. And because the Veylinx survey was conducted during July and August, the height of seltzer-consumption season, but also when sales volumes of the beverage suffered their greatest decline yet, it suggests brewers ought to move in a hurry if they want to salvage the drink.

Pointing to the profound impact hard seltzer has had on the alcoholic beverage industry, Veylinx CEO Anouar El Haji said, “We wanted to shed light on which brands and innovations are best positioned for the future.” While some survey results are not surprising, others were quite unexpected and point to a way forward for brewers.

The most widespread impact

More than tweaking the alcohol level higher or lower, adding vitamins or kombucha, or boosting immunity or energy, consumers said the one thing that would be interest them most was a CBD-infused hard seltzer.

Yet it was not uniform across all brands. For example, consumers like their White Claw from Mark Anthony Brands just the way it is. No added benefit, not even CBD, would do better for the brand than it’s doing now.

Yet even that benefit was mostly regional, the option being most popular in the West. The Northeast, South, and Midwest saw infusing hard seltzer with CBD as driving the greatest purchase interest. 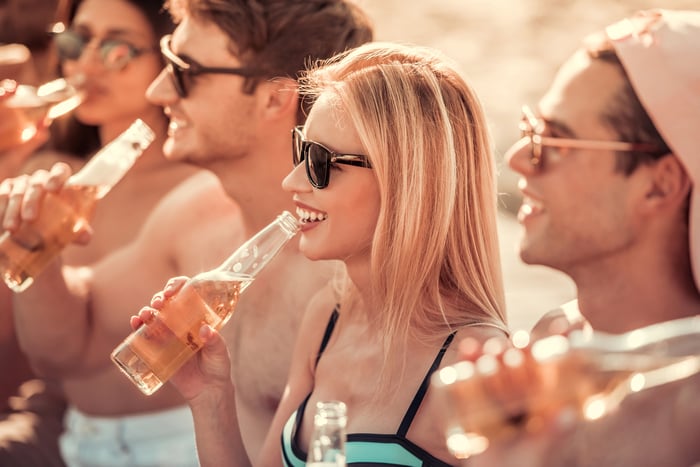 Because consumers stocked up on the beverage during the early stages of the COVID-19 outbreak, something they’re no longer doing now, and hard seltzer is underrepresented in bars and restaurants where people are now congregating again, sales growth is rapidly decelerating.

That truth was borne out by Veylinx data, which found 73% of consumers drank hard seltzer at home, with only about a quarter of them or fewer consuming it in bars, restaurants, or some other out-of-home venue.

It’s also been a tenet of faith that the switch from beer to seltzer occurred because of the perception it is a healthier drink alternative. While that may have been the original reason consumers moved away from beer, today 54% of consumers drink it for its refreshing taste with only 22% doing so because it’s perceived as more healthful.

There’s good reason to think CBD-infused seltzer could work, even as pairings between brewers and marijuana stocks have failed to ignite beverage sales otherwise.

One of the reasons cited for the failure of CBD beers and other beverages to gain traction has been their inability to be served in bars in Canada. In the U.S., where legalized recreational marijuana use is authorized in a patchwork quilt of states, it depends on the market whether CBD drinks can be served.

As we saw, though, most people who drink hard seltzer do so at home, so it makes sense a CBD version could actually sell. And since Boston Beer just partnered with Entourage Health‘s WeedMD and Peak Processing Solutions to produce cannabis-infused beverages later this year, a CBD-based Truly hard seltzer could revive its growth prospects.

It might not bring hard seltzer sales growth back to the triple-digit rates it previously saw, but it could save the alcoholic beverage from becoming just a summer drink.